I'm a little old school. In an age of purchasing tracks I still prefer listening to albums start to finish. Appreciating how tracks are arranged one after another and how they transition from one to the next is very important.

Music and coffee are my lifeblood. Coffee is difficult to share, so please accept my favorite albums released in 2016, including statistics on all music fed into my ears.

The below list is unranked and in alphabetical order.

If Trent Reznor never made music again (he snuck in a new Nine Inch Nails EP in 2016), The Black Queen could pick up the industrial electronic torch from where Nine Inch Nails leaves off.

While not directly affiliation with Reznor, The Black Queen features two former NIN alumni who can't hide their successful past by grinding out some of the best industrial-rock music programming since The Fragile. Frontman and vocalist Greg Puciato (The Dillinger Escape Plan) presents his softer side with subdued effect-laden vocals on top of careening 1980's synth-pop reincarnate.

The cooing vocals of Peter Kriek on the Cubicolor debut album Brainsugar echo those of Thom York (Radiohead), while its entrancing lo-fi beats spin a subzero cocoon as if Boards of Canada were remixed by a deep house DJ in a cold Montreal basement.

Die hard Radiohead fans will scoff Brainsugar a poor man's interlude, wondering no-man's land somewhere between Kid A and Amnesiac. Met with an open mind Cubicolor carve their own niche into a crowd of bedroom-borne imitators.

The Dillinger Escape Plan are an acquired taste. As in, they might last 5 seconds in Dad's stereo before being flung out the window leaving you both grounded and without a Dillinger album.

The band's final studio album Dissociation pushes all of their genre-bending extremes to their conclusion. Playing to their strengths, the band waver between unchecked hostility and dizzying shoe gaze, quite often within the same song. Haunts of Aphex Twin are scattered across several tracks (the song Fugue sounding directly lifted from Drukqs) as if we accidentally entered shuffle mode.

Car crash anthems like the track Honeysuckle dip in and out of jazz-inspired lulls, early Norma Jean-esque guitar-screeching interludes, crushing blast beats and quite literally some of the most brutal metal breakdowns ever recorded.

The line between incoherent rambling and genius is thin. Dissociation firmly lands in the latter camp and serves a fitting curtain call for a genre-defining band.

Every Time I Die - Low Teens

Nostalgic nods hearken to their hardcore-punk influence, complete with fist-pumping chant-alongs littered among crunching southern rock riffs. Each track bravely rolls the dice between genre, speed and tone. While not always successful the band will never fall victim to being labeled stale.

Metallica have settled their debts and risen from the ashes of St. Anger's snare drum to release the year's biggest surprise: a far from terrible Metallica album. In fact, this is Metallica at their best in 20 years.

Read my full review of Hardwired… To Self-Destruct.

The debut album from Moon Tooth forays into the crowded progressive metal genre and emerges with an original sound despite blending styles of their predecessors.

Heavy influence from early nu-metal titans System of a Down and oft-forgotten The Apex Theory are plentiful throughout the album. Intricate finger-style guitar work plays perfectly against progressive fill-oriented drums (think a less-technical Between The Buried and Me) while bass lines wonder their own path up and down the scale behind a wide-range of vocal ranges and styles.

The band are incredibly talented musicians and take turns showcasing their prowess. With so much musicality packed into each track no two listens yield the same listen. Repeat listens are rewarded with the satisfaction of having memorized many of the intricate musical parts, clearing way to discover nuance that was overshadowed on prior listens.

Don't be surprised to see these guys opening for the genre's more seasoned acts in 2017 as they make a well-deserved name for themselves.

Thanks to Last.fm for tracking my every listen since June 2005. 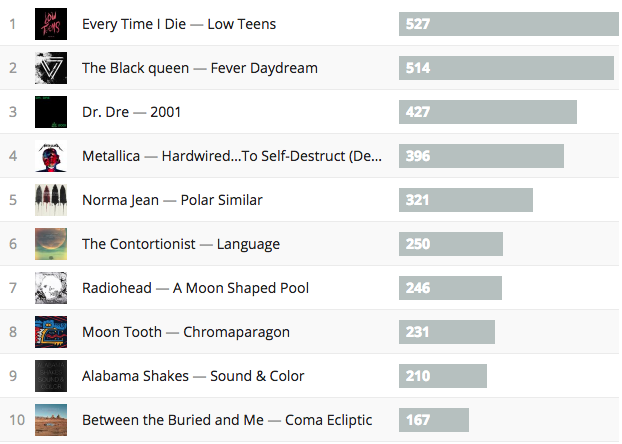 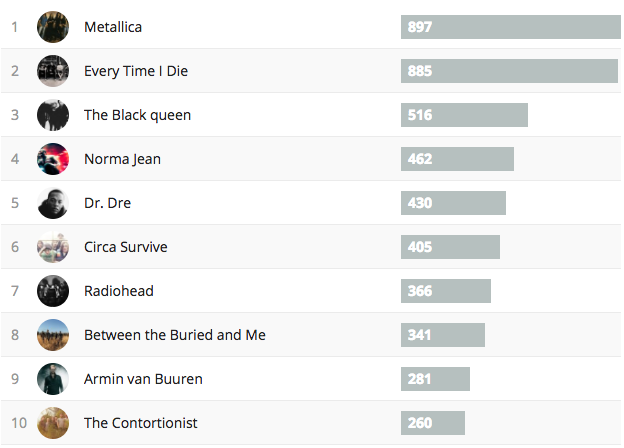