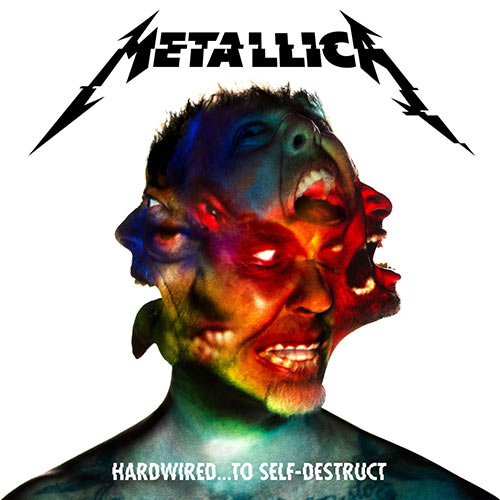 Listen on Spotify while reading.

Look. Hardwired… To Self-Destruct is to Metallica as The Force Awakens is to Star Wars. There is no way the "new" can ever top the "old." The best "new" can only ever co-exist with the "old" by simply not fucking up its reputation. With me so far?

Metallica endured a rough ride releasing Load (1996), Reload (1997) and Garage Inc. (1998) mostly departing from the shredding thrash metal songs that made them kings of the genre in the 80's. Long-time fans took it personal, heralding the band sell-outs.

Not content with a musical fall from grace the band confirmed their critics by suing Napster in 2000, drawing a fireball of criticism from progressive technoliterate music fans, only confirming Metallica as washed up rockers playing right into the greedy, technophobic stereotype.

Then what can only be rationalized as retaliation, the band released St. Anger (2003) and Death Magnetic (2008), both plagued by poor sound production choices and downright terrible songwriting. Undoubtedly these were two of the worst albums ever released by a legitimate metal band.

Frankly everyone (including me) relished watching the wreckage burn.

But somehow with Hardwired… Metallica have agreed to settle debts with their fanbase and risen like a phoenix from the ashes of St. Anger's snare drum. Forgiving the derpy album artwork, most tracks drip of nostalgic as if reincarnated B-sides haunting the band's golden years.

Opening track Hardwired is the shortest on the album at 3:11 but rips straight for the jugular landing more unrelenting jabs and body shots than any song twice its length.

The swelling intro and soaring riffs on Moth Into Flame feature the album's catchiest lyrical hooks (Same rise and fall / Who cares at all / Seduced by fame / A moth into the flame) all together masquerading as a really damn good Seek and Destroy rip off.

But the album begins coasting downhill. The midpoint feels lonely and rhythmically repetitive by Halo On Fire, which rolls into Confusion, then saved by some solid southern rock riffs on ManUNkind, and back to the lonely road with Here Comes Revenge. After numerous listens these tracks fade into the background, only briefly cropping into the conscious with catchy ear worm chorus lyrics.

However the final track Spit Out The Bone accelerates out of cruise control with a crisp, almost drum-roll snare drum before an upbeat chugga-chugga-chugga-chugga riff reminds us Metallica have life left in them. Numerous breakdowns, wailing guitar solos and double-bass round off the album in the best way possible: leaving us hungry for another listen. The "Repeat Album" setting feeds that hunger ripping straight back into the opening track Hardwired.

The album's Deluxe Edition track Lords of Summer says it best: (It's been a long lonely winter / The lords of summer have returned!)

Let's be real: only Metallica could save Metallica. With Hardwired… To Self-Destruct the band have redeemed over 20 years of disappointing music. Not with their best album of all time, or even of that 20 year span, but one sure to reclaim displaced fans.

While far from flawless or without fat fit for trimming, Hardwired… is a return to greatness by simply not fucking it up.

Each video is stylistically unique, ranging from fully animated story-arc narratives, to making-of in-the-studio style overlaid with album tracks, to quintessentially playing in a warehouse, to professionally recorded concert performances. Those appreciating the lost art of the music video will find value in watching each one.

Yes, that is Metallica, posting their entire new album on YouTube. For free.

My, my, how times have changed.